The south Moravian town of Vyškov with its 21,000 inhabitants is located on the upper part of the Haná River, about 30 km northeast of Brno. It represents the cultural, social and economic hub of the region.

The first written record about Vyškov appears in a document from 1141 by Jidřich Zdík, the bishop of Olomouc. Bishop Bruno of Schauenburk characterized Vyškov in 1267 as “oppidum forense”, i.e. an urban town settlement with a market. The development of the settlement into one of the leading towns of Olomouc Diocese culminated in the 14th century. Otherwise convenient location of the town increased the risk of being attacked during war times. During the Hussite wars, Vyškov, which remained loyal to the bishop, was conquered and ruined by the Hussites. Bishop Tas of Černá Hora, a member of Boskovice nobles, who contributed to the town renewal in the second half of the 15th century, had the ruined town’s privileges rewritten and expanded. The calmer period of the 16th and the beginning of the 17th century reflected the economic prosperity of the town which was governed by a mayor and four councilors at that time. Woolen clothes production and pottery were the most widely spread among the crafts, and butchery was the oldest guild. In the 17th century, Vyškov was highly affected by the Thirty Year’s War. The town was occupied twice by the Swedes and during their second invasion in 1643, it was completely plundered. Vyškov reached the greatest heyday at the end of the 17th century during the rule of bishop Karel of Liechtenstein. This prosperous period was ended with a great fire of the town in 1753. 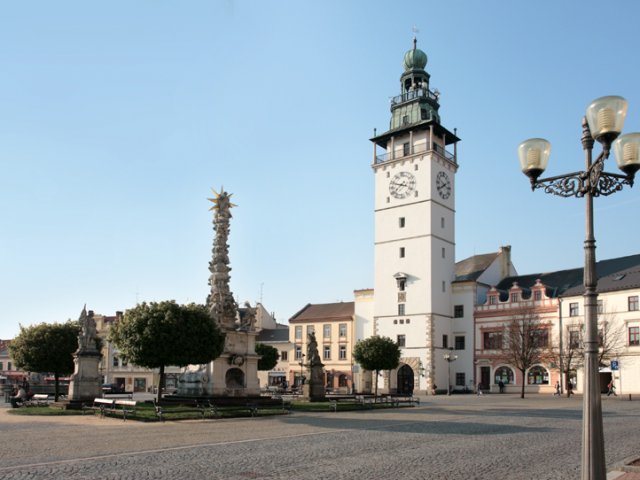 In Vyškov, there are a number of preserved historic sights. The remains of town fortification date from the 15th century. The original gothic castle was rebuilt to a chateau and it was given its current look, based on the project by the architect Giovanni Pietro Tencalla, during the rule of Karel of Liechtenstein in the second half of the 17th century. The chateau used to have a gallery, and in the theatre, Italian opera performances used to be on. In 1774, a military hospital was set up there, and that’s when the stucco and fresco decorations disappeared. At present, there is the Museum of Vyškov’s region in the chateau, which offers eight permanent expositions and current exhibitions.

Currently, the museum gathers historic, natural, archaeological, ethnographic and art collections. An extensive collection of Vyškov folk ceramics is also well known. The chateau’s garden existed already in the 15th century. After the Swedish invasion, the garden was renovated by bishop Karel of Lichtenstein. There is an adjacent brewery, founded in 1680. The dominant feature of a typical triangular town square is the renaissance town hall which was built in 1569. The Plague Column from 1719 is a work of the sculptor Christian Probstl. Another important monument in the town square is the baroque fountain with a motif of Ganymede on an eagle. St Mary Ascension Church was in construction from 1464 to 1466, St Otylie Chapel dates from 1692. The Augsburg painter Johanes Drenttwet is the author of the fresco decorations with legend about St Otýlie. Baldassare Fontana decorated the chapel with stucco. In the great fire of 1753, the church was damaged and consequently rebuilt in the baroque style in 1773.

The military garrison was established in Vyškov in 1936, when Offensive Armed Vehicles Regiment 2 moved to the town. In 1937, the Training Institution of the Offensive Armed Vehicles from Milovice was relocated to the town. After World War II, the Tank Training Institution gradually came into existence, which was later followed by the Military School, the Higher Military School, and the Faculty of Command and Organizing, which was ended in 1972 when the Military University of Ground Forces was opened in Vyškov. In 2004, it was formally ended and merged with the University of Defence, which has its headquarters in Brno.